How does God’s love abide in anyone who has the world’s goods and sees a brother or sister in need and yet refuses help? 1 John 3:17

You’ve heard me talk before about my work on undoing racism that started in the 1990s.  A group of us met nearly weekly for many years and then at least monthly until about 2006.  We called ourselves People Against Racism or PAR.

Ralph was African-American and an active member of PAR.  He was a quiet man…the kind that doesn’t talk a lot, but when he did speak, it was something profound and illuminating.  One time PAR was meeting with people interested in representing our region in the state legislature.  Ralph said something to the candidate I’ve never forgotten.

The candidate was a man who was white.  He had done many good things in our city. Yet, Ralph explained that he knew without a doubt that at some point working against racism and serving people who were not white would become very difficult for this candidate.  Ralph said he knew this to be true…that every person who was white had a point at which working against racism became too hard …a point when they would stop working in an anti-racist way and return to their way of living in White Privilege…a point where they would no longer work for the benefit of all people.

Ralph wasn’t angry as he said this.  He was very matter-of-fact and actually very kind and loving as he said it.  It was just reality. What he wanted from the candidate, and in turn from each of us there who was White, was to know when we had reached that point and could no longer work to undo racism.  He just wanted us to promise to let him know when we could no longer work alongside of him to tear down the oppression inherent in our community.

How does God’s love abide in anyone who has the world’s goods and sees a brother or sister in need and yet refuses help?

We are challenged today to proclaim the Gospel by demonstrating that we are followers of Christ…that God’s love abides in us through our actions.  We’re being asked the question that Ralph asked our group – is there a point at which you will stop demonstrating love for your brother or sister?  Is there a point where you will say, “enough is enough” and refuse to help a brother or sister in need?

I don’t know about you, but I get tired of being asked for help.  Sometimes people have asked for help, coming to the church, and later I find out they’ve totally lied to me.  In New York City and Washington, DC, there are many people along the streets or by the transportation centers asking for money.  It happens here in Corbin, too.  I’m so conflicted when it happens.  I read the verse like the one today and know I live extremely well by the standards of the rest of the world.  I know the blessings I get when I am generous, even if the other person is manipulative.  But sometimes I just don’t want to give.  I console myself by giving to the church or the food pantry instead of to individuals.

And today’s Epistle asks us to grapple with…to wrestle with how we demonstrate love, how our entire lives proclaim the Gospel.  To grapple with and wrestle with how much of the world’s goods we truly need, especially if those goods prevent us from assisting a brother or sister in need.  Could we live in a smaller house and use the savings to give more generously to our brothers and sisters in need, for instance?

And today is a good day to look at us as a community…St. John’s Episcopal Church.  How are we doing in demonstrating our love for our brothers and sisters in need?  How are we doing in proclaiming the Gospel? When we’re all working together love blooms and multiplies, doesn’t it?  We can do so much more together than we can do alone.

I’m so excited about the great idea that emerged from our April Vestry meeting.  Remember that the 2 ½ day Diocesan Convention was cancelled due to weather and replaced by a 1-day event in late March.  We had paid $700 in registration fees for the Convention and in early April were told we could receive a full refund of those fees OR we could let the Diocese keep the fees and use them for the Diocesan ministries.

You know it was hard to pass up a refund of $700, putting that back into our bank account.  But at the same time, if the convention had been held, we wouldn’t have that money back.  And we wanted to support the Diocesan ministries and had already agreed we’d raise $400 for Reading Camp.

And then it happened…  I’m not sure who said it first…It was one of those things that happen when you’re in a room with a group of people and you’re working together.  We’d say, the Holy Spirit moved in that room.  It opened us up.  Instead of hitting that place Ralph talked about..that turning back place where we’d deny the love of God by refusing to help our brother or sister in need…instead of being fearful about meeting our budget for the year, we became generous!

With the help of Katie and Daniel, our first project is raising at least $400 for Reading Camp.  St. John’s will match the first $200 raised, dollar for dollar.  We’ll do the same for Cathedral Domain and for St. Agnes’ House.  We’ll also match the first $100 raised for St. Augustine’s campus ministry.  We decided to demonstrate our love by taking $700 and turning it into at least $1,400!

That’s what love in action looks like. Last week with 25 people present, we raised over $100 for Reading Camp!  When we help our brothers and sisters in need, our hearts grow, because God’s love lives in us and we live in the heart of God.  It’s a great, exciting and beautiful place to be.

And that’s just one example of how we as a community walk the talk about love.  That’s just one way we proclaim the Gospel of Jesus Christ to the world.  It’s not easy…it’s a challenging way to live in this world…it’s counter to much of our thinking about the world… Yet, if we are to call ourselves Christians…if we are to be followers of Jesus Christ, who freely and humbly gave his life on the cross because God loved us so deeply, if we are to proclaim the Gospel, it’s what we MUST do. 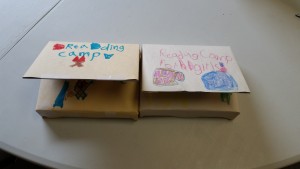 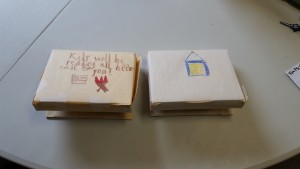